Pikachu Outbreak : This Week in Japan

You were warned, and we hope you listened when we told you to hide yo’ kids and hide yo’ wives again this year because the annual Pikachu Outbreak occurred this year in Japan! And, with rumors of an Eevee epidemic parade…

Now you can enjoy more of those Pikachu parade videos, because 20 adorable Pikachu’s made their appearance through a well-choreographed dance number on the streets of Yokohama from August 10th to August 16th. This year’s theme was Pokémon Synchronicity, and a first-ever presentation using digital technology, paired with the backdrop of the sea, was held to open the annual show. 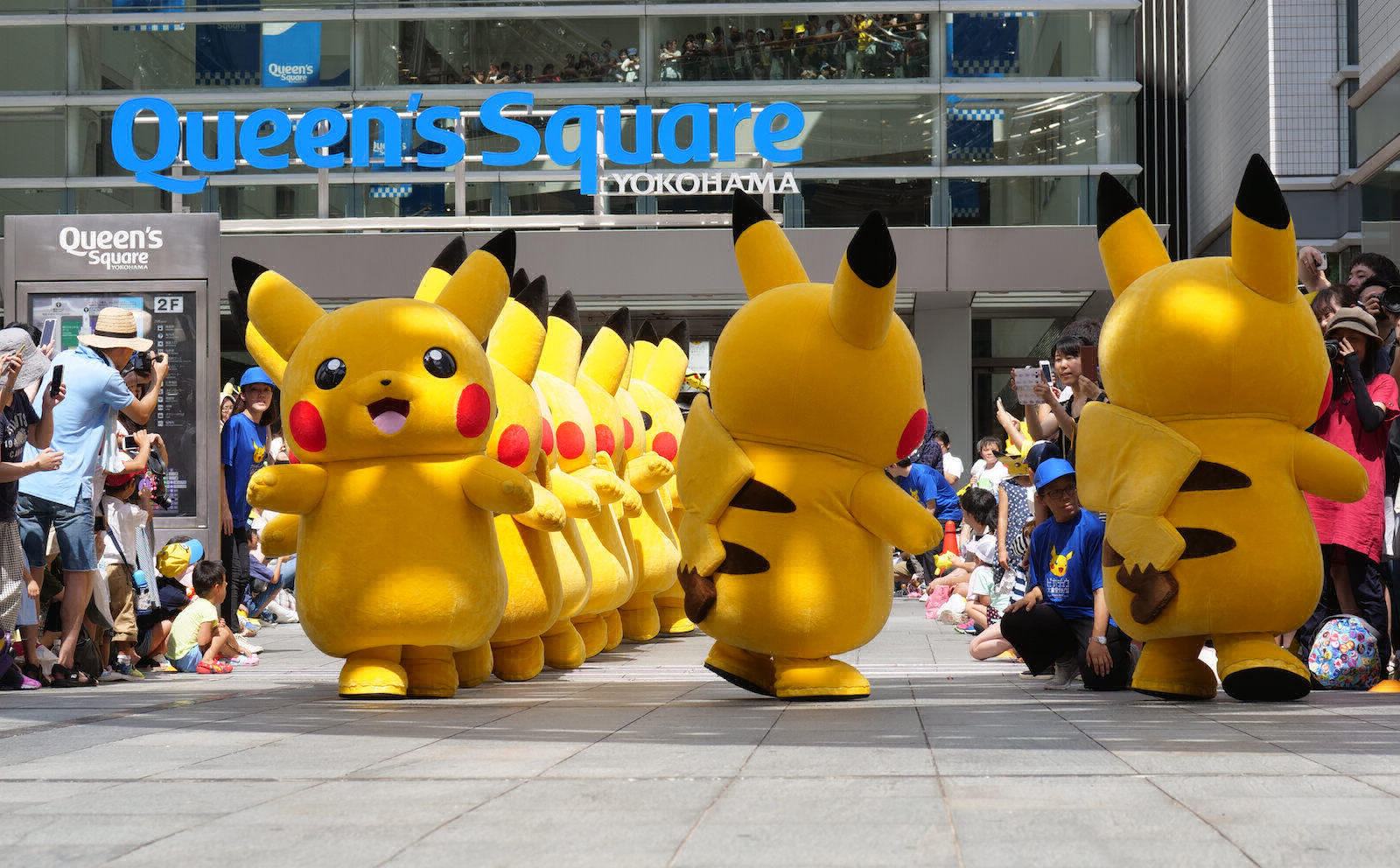 Now they say there’s 20 adorable Pikachu’s– and there are– but apparently, more than 1,500 Pikachu’s stormed the city in lockstep choreography. The parades happened twice every day, both a noon and at night, where they geared up for some glitzy electric costumes to light up the streets. Terrifying? Definitely. 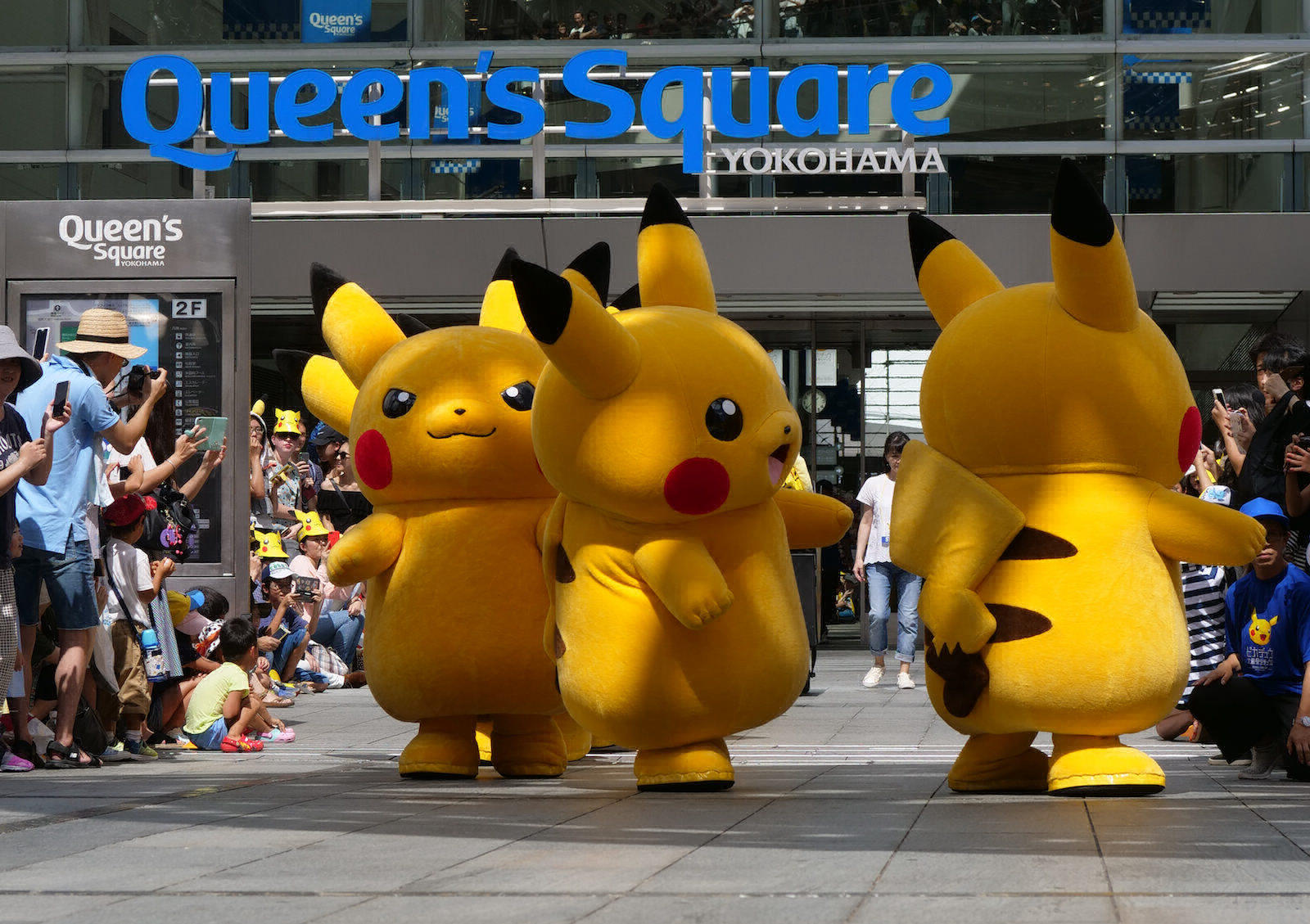 Utilizing the facilities of Yokohama Bay, the smash “Super Soaking Splash” show blasted two tonnes of water as part of its performance show and of course, soaking the audience as well. To follow the water theme, boats were packed full of Pikachu’s toured around Yokohama Bay for that perfect #chillin’-in-Japan-oh-look-a-wild-Pikachu-appeared-on-the-water Instagram shot. Oh, and don’t forget to grab all that exclusive Pokémon merch to top it all off! 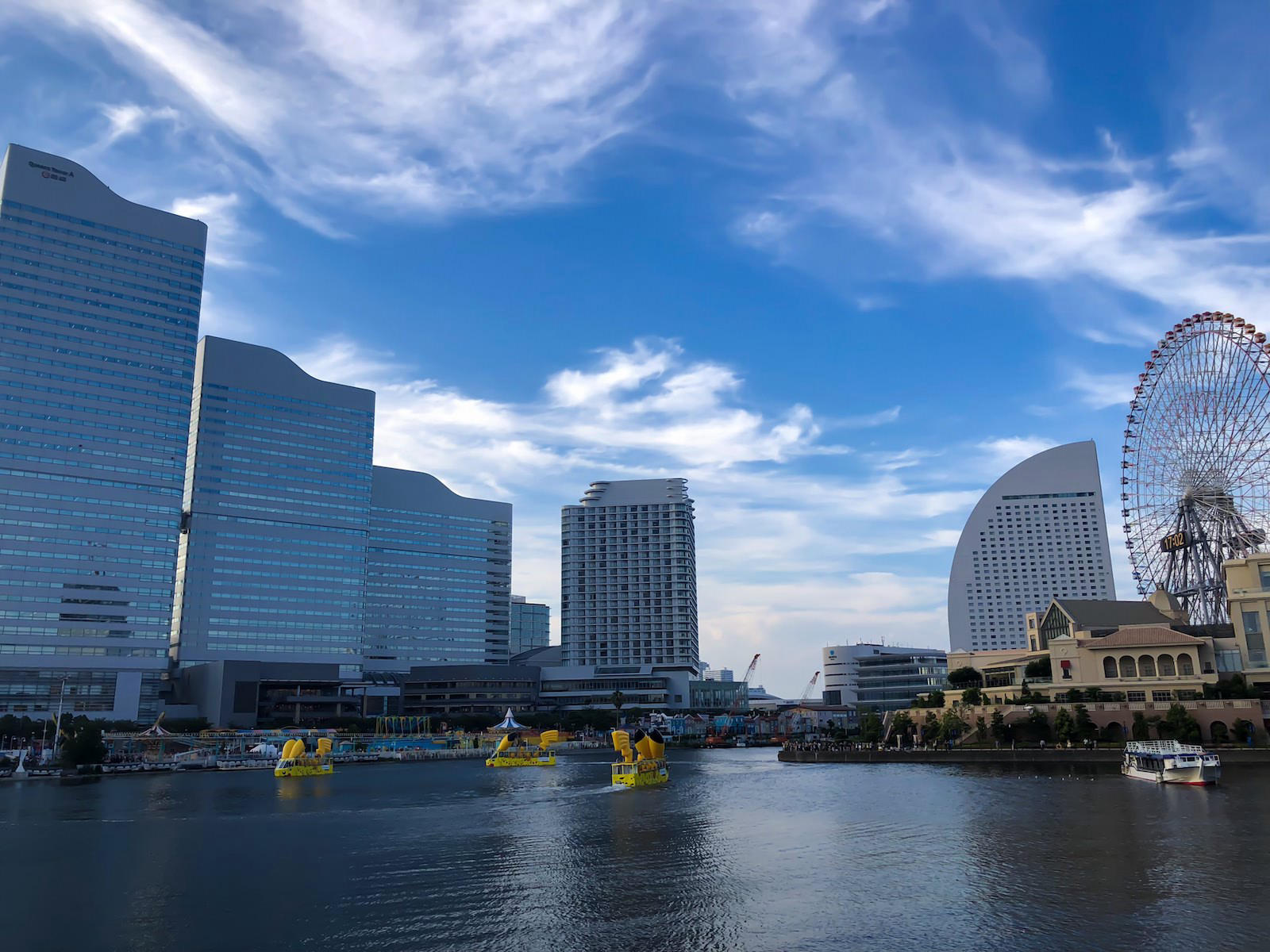 Although the event was successful, it didn’t come without its own set of issues. Luck had it that the parade took place in the peak of Japan’s deadly heatwave with a sprinkle of typhoon in the late afternoon, meaning that the first ever Eevee epidemic was unfortunately canceled on the opening day. But for the rest of the event, everything seemed to go swimmingly, and all the Pikachu’s and Eevees lived happily ever after. See ya next year Pokemon pals!

We went to this event to have fun with Pikachu and Eevees but some of the events were canceled because of bad weather, unfortunately, so want to share some article with you to read in here!

To all our readers: our greatest dreams and wishes have been granted. Sure, Europe has already had them for a while, but if you’ve ever ordered Pizza Hut or Dominos in Japan, you’d know that good fast food pizza in Japan is close to non-existent.

But now, everything will change. That’s right. Decked out in the iconic red, white and green, Japan’s first pizza vending machine is up and running alongside its cold beverage-serving peers in the outskirt alleys of Hiroshima. The vending machine, aptly named ‘Pizza Self’ currently only dishes out two types of pizza: margarita for 980 yen and four cheese for 1280 yen.

With strong support on our end, it’s important to remember that the pizza vending machine has its own faults as well. Despite the machine fronting its skill to be able to pop out a pizza baby from the oven in 3 minutes, Twitter user @__HIPPY__ tested it and states that the whole process took about 5 minutes. After 5 desperate minutes of patience, the pizza comes out through a slot in a takeout-style box, and not steamy hot, but just… average hot. 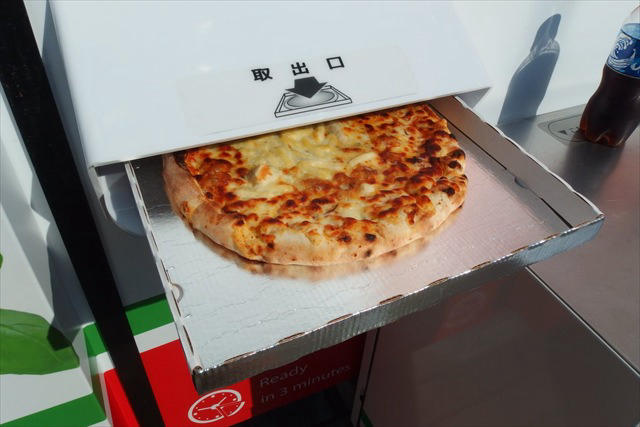 However, many testers tested finishes by saying that the overall experience of the pizza vending machine was good– the pizza was hot, and the blue cheese gave a feeling of sophistication. But also, we think it’s important to add that the vending machine is apparently well located in front of a video store, making this a go-to spot among locals for the perfect night in. Check out the queue:

If it seems a bit pricey to you, just know, you’re paying for its 24-hour convenience and incredible non-face-to-face service (as it comes with a pizza cutter, so you can enjoy your ad-hoc pizza). It’s much cheaper than takeaway pizza joints, but also… blue cheese? That’s fancy AF. 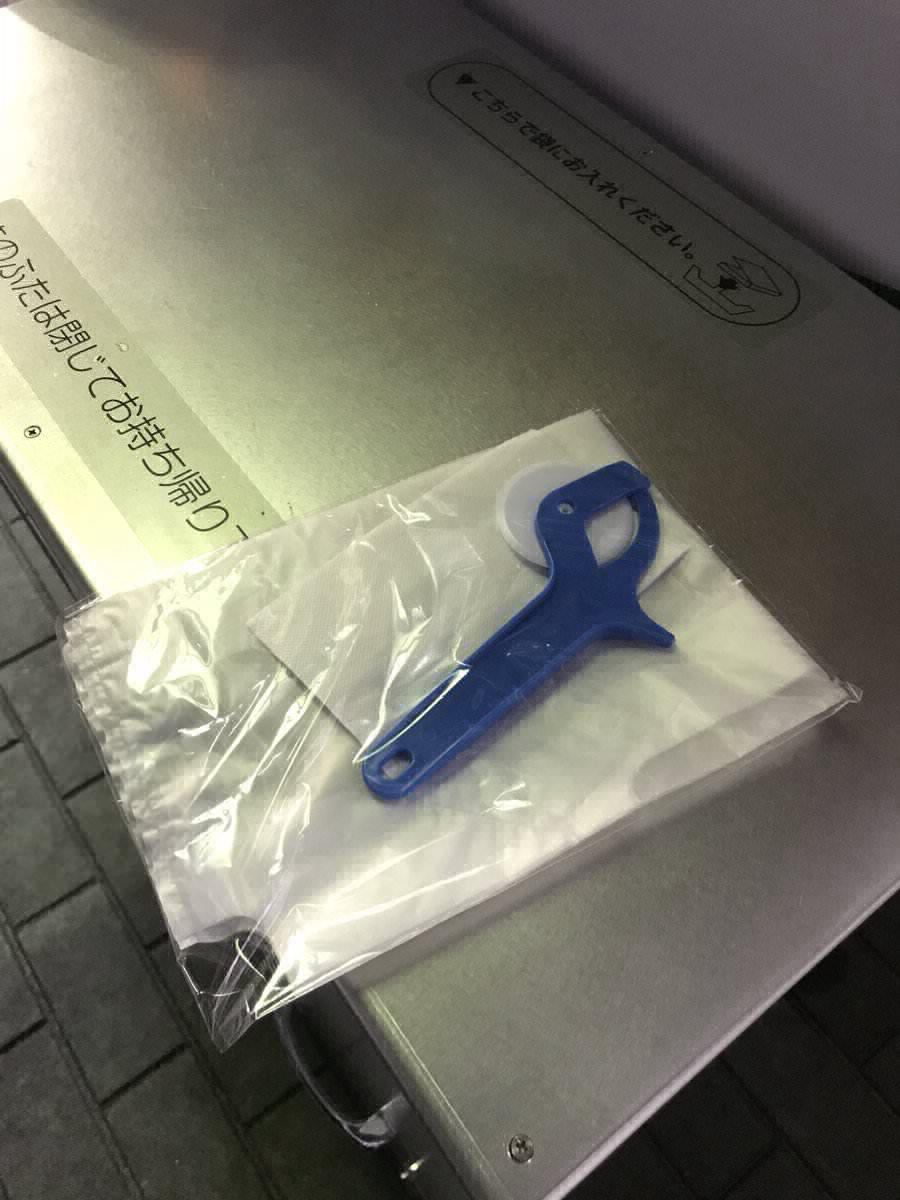 Decades of constant nagging on our part has finally shown fruition, and the world finally listened when we begged for a pizza vending machine in Japan. Our next step? Begging our bosses for the vending machine to pop up in our office. 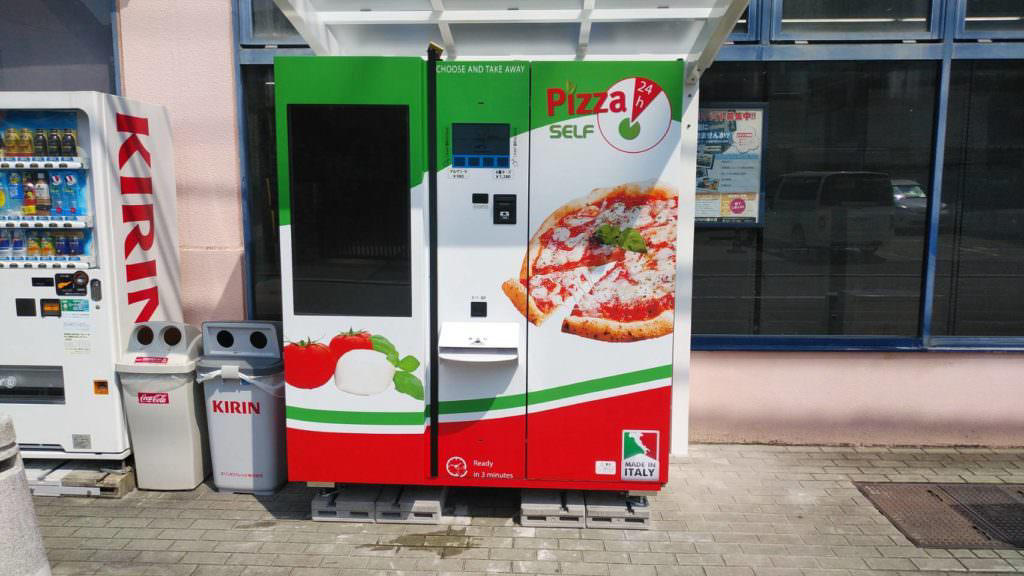 3. Tokyo drama-ramen is served up at a chill -79 degrees Celsius

Had enough of us complaining about the heat yet? Sick of counting the infinite amounts of ‘atsui ne’ that you hear on a day to day basis?

Well, we’re going to continue to complain about how it’s ridiculous that the heat was able to melt the legs of anime figurines, or how it’s so serious now that there is a death count of more than 100 people.

So, sit back for another article related to how Japanese people are trying to deflect from summer and resist the urge to rip off all their clothes in public areas to cool down. In today’s attempts, we introduce a Tokyo ramen joint that serves up their ramen in a container chilled to -79 degrees Celsius (-110.2 Fahrenheit).

Yep. Cooling down with kakigori and ice cream isn’t an option anymore for us. It’s time to go big or go home by freezing our entire tongues off now.

Offered by Pasela, the operator of a chain of karaoke parlors, the dish you want is called the Hiyashi Paro, so after your long Bohemian Rhapsody solo, you can cool down as the cold ramen is brought to your room. Stored in a traditional ramen delivery case that insulates the ramen by using dry ice and topped with cherry-on-top dramatic elements of an icy blue light and special background music that plays once it’s opened (ugh, we LIVE for this nonsensical boujee extravagance). 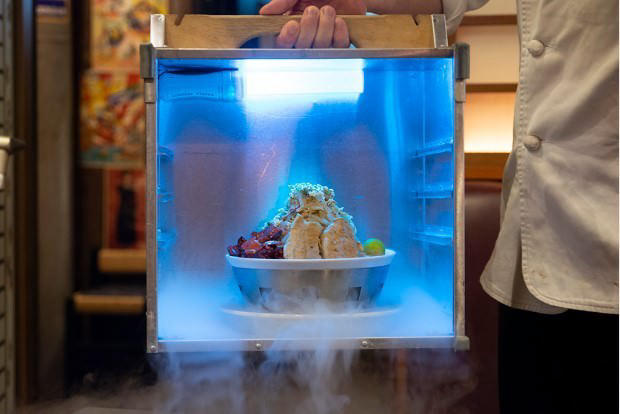 Now, cold ramen isn’t particularly unusual– it’s usually light-weight, and almost salad-like. But man, the Hiyashi Paro is a hearty boy and comes with a thick chashu pork slice, deep-fried red-peppers, and a mountain of chilled veggies, seasoned with a dollop of mayo and sansho pepper. 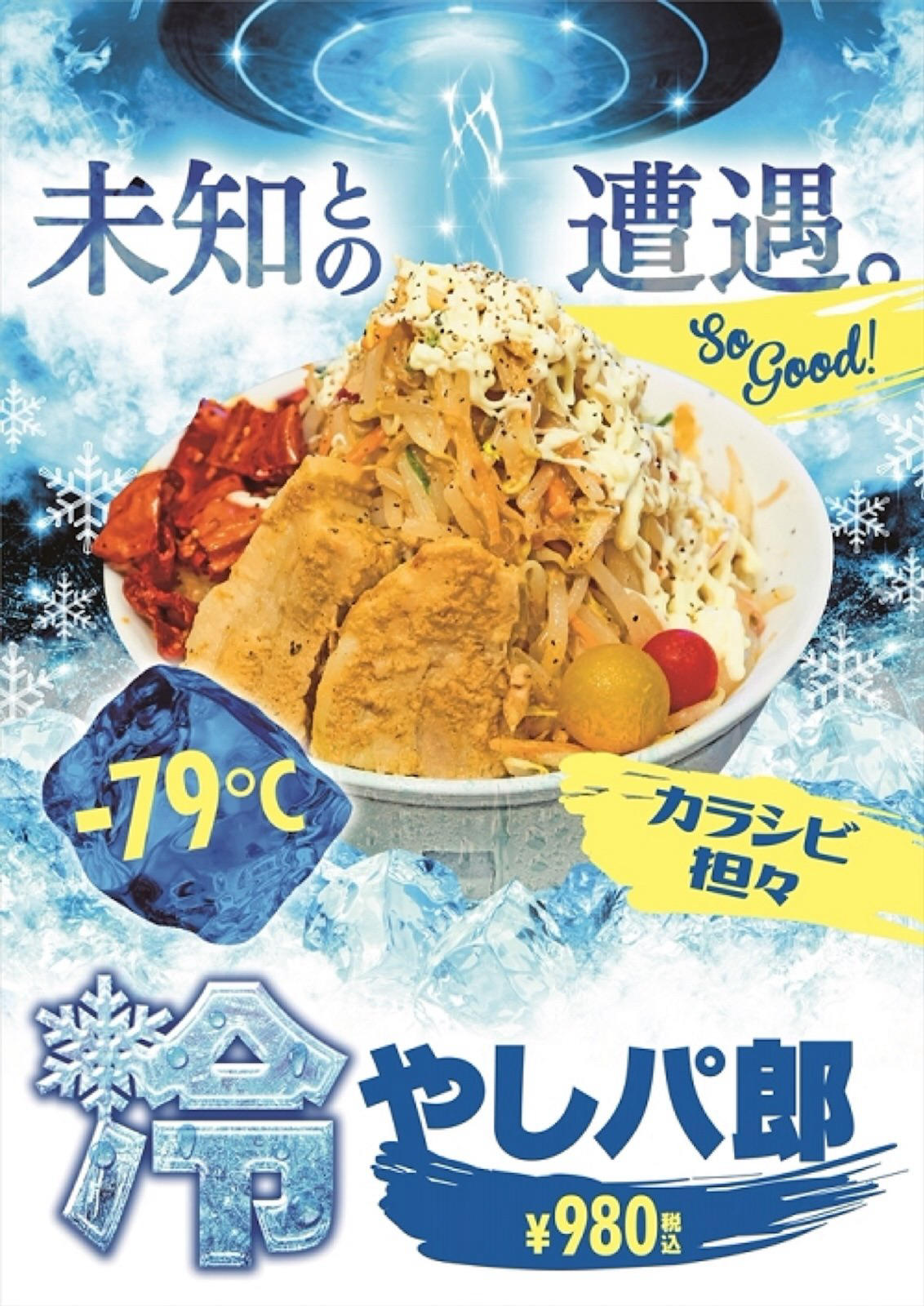 Well, I guess that means we’ll be seeing you at Pasela’s Akihabara Showadori branch where it’s priced at 980 yen, every day before September 15th.

Drink up with Pokemon Vending machines

Never ending spawn of Pikachu's , adding a extra cuteness , in celebration of this years  Pikachu Outbreak 2017 , there will be special Pikachu edition Vending

Days of cuteness with Pikachu!!!!!

Pikachu is taking over Yokohama from 9th August - 15th August.Come and see  the Pikachu Parade, Pikachu Performances and play Pokemon Go at the park and stadium

Get the groove, got to move! Get on down with Pikachu! The stereos blast catchy music as people snap shots of a certain yellow mouse-like creature. This past S

A Pikachu Festival in Yokohama, Japan!

A Pikachu Festival in Yokohama! What other unique things will we see in Japan?

Watch Video
Article by Mike B