Shodoshima: Be Your Best Artistic Self

If you’re in Japan for its art and cultural beauty, then you might have already planned to go to Naoshima– that place where Yayoi Kusama’s famous polka-dot sculptures are installed around the island. Well, in preparation for this year’s Setouchi Triennale Art Festival, Tokyo Creative wants to also shine some light on its low-key, art-obsessed neighboring island, Shodoshima (小豆島).

Located in Japan’s Seto Inland Sea, Shodoshima is considered to be one of the first islands created by gods in the creation myth of Japan. Today, it’s known for its beautiful olive grove and plantations, the island that influenced Hayao Miyazaki’s Ghibli hit ‘Kiki’s Delivery Service’, and it’s beautiful beaches, resorts, and gorges.

But in 2019, Shodoshima will be known for housing some of the world’s best artworks as one of the main venues for the Setouchi Triennale Art Festival. Already on the island are some permanent installations from past festivals, and to complement, several outdoor installations and interactive works will be available for visitors to enjoy in this year’s Triennale.

Like a true art connoisseur, when you’re taking your time perusing through the endless list of artworks on Shodoshima, you absolutely NEED your beret, black turtle neck and a glass of red or white. But because this is Japan, it’s a rite of passage that you sip, swerve and pop an olive in your sake, instead of wine.

Close to Kochi City that’s known for its sake-loving culture, Shodoshima also holds some of that reputation, but in a more toned-down and technical way. Instead of liquid courage, the people of Shodoshima are more interested in liquid construction– as the only brewery on the island, Morikuni Shuzo solely revived sake making on the island in the 1970s after a silence of sake service for 35 years.

While maintaining and preserving the island’s traditional brew, the brewery continues to whip up some of the best Japanese sake in the world, with their Ginjo and Joumai sake lines winning the top prize in Japan’s annual people’s choice sake prize.

Although, I'm not much of a sake drinker myself, these two brews went down super smoothly and there was a tinge of freshness to both of them.

True to their island tastes, Shodoshima is also home to one of Japan's most unique bakeries: Morikuni Bakery. Freshly baked every day, these little buns of goodness are guaranteed to make you feel all warm inside... because some of it's products also include their prized nihonshu!

So of course, we had to try it. We ordered the ‘Nihonshu Anko (red bean)’ bun and admittedly, we were scared that the anko was going to have too much nihonshu in it. However, the nihonshu was actually infused into the bread itself, and the anko was light and not overwhelmingly sweet. The bread itself did have an aftertaste of bitterness reminiscent of nihonshu, but the fluffiness of the bread and the sweetness of the anko balanced it all out. For 280 yen a bun, you’re paying for an incredibly sophisticated and most importantly, a tasty anko-nihonshu bun for an incredibly cheap price.

If you’re a sucker for some slick architectural design like me, then this place is also extremely well-designed by Dot Architects. Using raw materials such as stone, wood, and straw, the bakery really focuses on being in unison with the outside environment. It’s huge windows let in a lot of natural light and the high ceiling really makes you feel like you’re in a winter cabin in the middle of the woods, only better, because you can also enjoy the smell of freshly baked bread wafting through the bakery.

Hands down the place we enjoyed the most on Shodoshima was the famous Olive Groves– also known as the one and only spot that inspired Ghibli’s genius director, animator, and artist Hayao Miyazaki’s ‘Kiki’s Delivery Service’. The whole spot is incredibly beautiful; heavily inspired by the beauty of our friends in the Mediterranean, Shodoshima’s Olive Garden replicates the beautiful white building structures, windmill, plant groves, and recipes.

As you can see, the estate is… huge, to say the least. The Olive Hill Park has it’s own herbal garden, two olive-specialty restaurants, a hotel accommodation that overlooks the sea, onsen spot for optimum relaxation, and a place where you can buy Shodoshima-only produce and food ingredients– all containing some sort of Olive, of course.

In the main building, you can also take a little bit of Shodoshima home with you with an Olive-leaf bookmark. The little olive leaf is supposed to symbolize happiness and peace, so this cute little talisman is the perfect souvenir for you to take with you! They also sell olive ice cream and olive-infused teas here, which we can personally say was one of the best-tasting ice-creams of all time, so please try it and send us pictures, because we’ll do anything to have olive ice cream again.

Besides the olive ice cream, our favorite part of Olive Hills Park was the most beautiful Grecian-inspired windmill.

Free of entry, we recommend you pick out your favorite navy dress and red ribbon because the park has everything else prepared for you to achieve the full Kiki look. In the main building, you’re able to borrow an official Kiki’s Delivery Service broomstick and accompanying Jiji companion to join you on your witch-training. Straddle your broom, cast a spell, and jump as high as you can for that best Instagram shot! 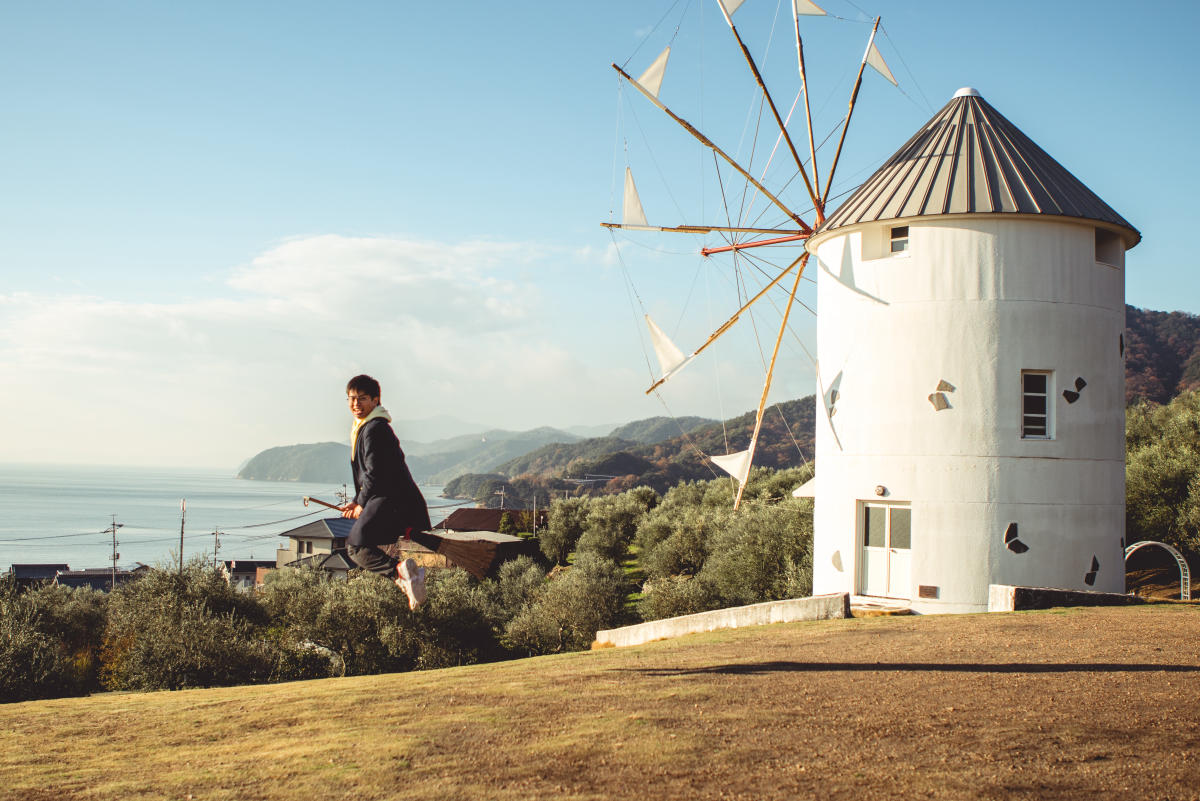 Was this just an article for us to brag about what we ate on our trip to Shodoshima?

But we definitely enjoyed living like a Shodoshima local too! if you’re around the area, don’t forget to also check out what we recommend in Kochi and Shimanto City. If you just so happen to be doing an Asia trip and are flying in from Hong Kong, you’re in luck because Hong Kong Express flights have finally partnered up with Kotobus Airport Express from Hong Kong Airport to Takamatsu Airport. From there, you can switch to Takamatsu Port and take the ferry to Shodoshima to try as much sake and olive foods as you can before you take on the challenge of seeing all the works in the Setouchi Triennale!

Offering an outdoor pool in the summer season, Hotel Green Plaza Shodoshima features a hot spring bath, a sauna and free Wi-Fi at the lobby. Guests can play min

A 10-minute drive from the Kashima beach, Resort Hotel Olivean Shodoshima features accommodations with sea views and either a sunrise or sunset view. The Tonosh

A Complete Guide to Gallery Hopping in Tokyo: See More For 1000 Yen or Less!

As someone studying arts and design in Tokyo, I definitely believe that Tokyo is one of the best places to fuel your artistic inspirations. Whether you’re inte