Built in the 8th century, Usa Shrine (宇佐神宮, Usa Jingū), is the head shrine to more than 40,000 shrines across Japan that worship the Hachiman god (aka. the Shinto god of war). Although he may sound intimidating, he was the guardian of the warriors and also the divine protector of Japan and to the Imperial family. For this reason, Usa shrine is ranked second in prestige to that of Ise shrine. Each year, more than 1.5 million visitors come to worship to take in the beautiful architecture of Usa shrine.

If you love the architectural beauty of Japanese shrines, then Usa shrine is a must visit for you. Not only does Usa shrine hold the status of being the head shrine to more than 40,000 other Hachiman shrines, it’s where the traditional architectural style, known as Hachiman Zukuri (八幡造) architecture was first introduced.

This is when two halls are connected together by a triangle gabled rooftop to make it appear as though it’s two buildings when in reality, it’s just one. You’ll be able to marvel in its striking architectural beauty along with the three main shrines dedicated to Hachiman (Emperor Ojin), his mother (Empress Jingu) and his wife (Princess Okami).

It’s not just the upper complex that’s a must see at Usa shrine. With the complex being so large, Usa shrine offers multiple locations to capture its beauty. Head to the Kurehashi (呉橋) to capture the beauty of the roofed bridge that is said to open up once every ten years during a festival.

Or if you are a history buff, head into the treasure hall (admission to enter is 300 YEN), located next to the pond where you can learn more about the ancient artifacts of Usa shrine.

Everywhere you go, Usa shrine is surrounded by the lush greenery of the forest and its ponds, which make the perfect backdrop for all your pictures. 🌿🌳

The contrast between the bold red buildings against the green are just stunning.

3. Increase Your Love and Good Fortune at Usa Shrine 🍀

Whether you believe it in or not, it’s still fun to try. At Usa shrine, here are some “rituals” you can try to increase your love and good health.

Stand On the Love Stone ❤️

Also known as the Meoto Ishi (夫婦石) which means husband and wife stone, they are two large triangle shaped stones said to bring you love. For singles, place one foot on either stone to receive good luck for your love life. For couples, stand on each stone while holding hands. It’s said to bring love and happiness for many years to come.

Located by the footsteps of the Wakamiya shrine (若宮神社).

Another ritual you can try is to do a loop around the 800 year old tree and then gently touch the tree. It’s said to bring you longevity and good health. 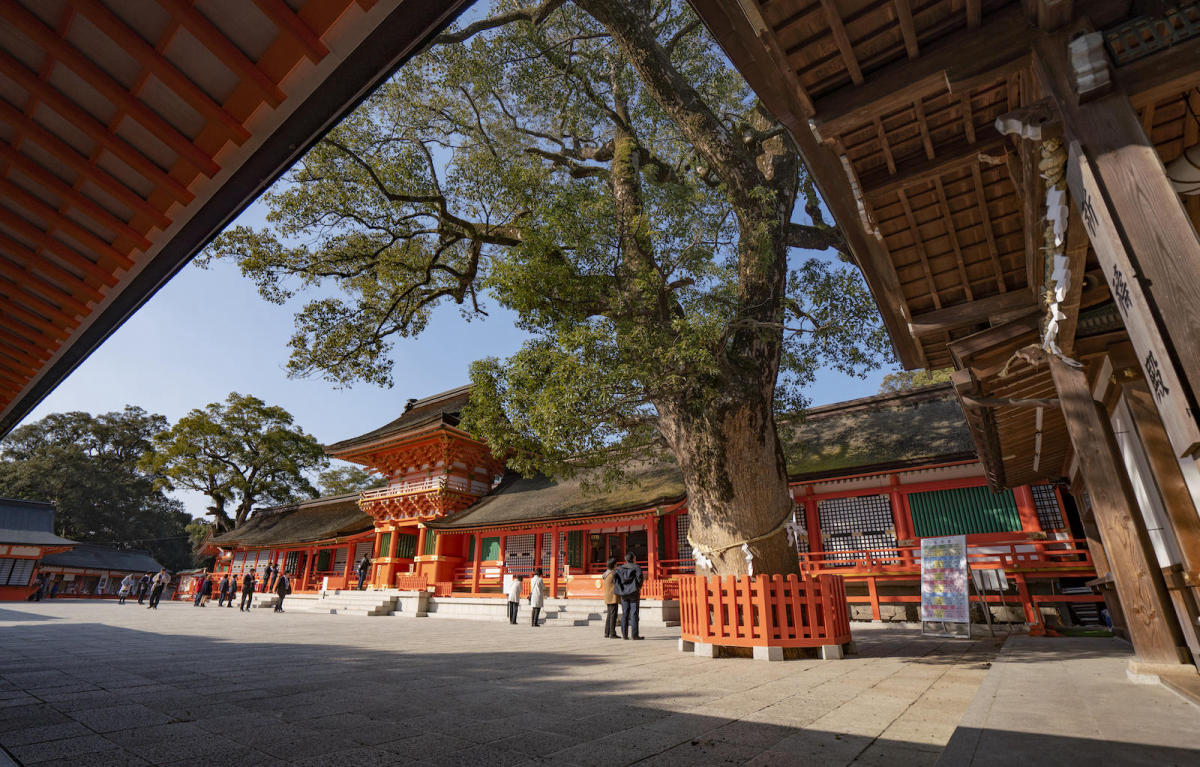 Located on the grounds of the upper complex of the main shrine.

Emma educates you on why Japanese Convenience Stores are so popular in Japan!

TOP 5 REASONS TO VISIT JAPANYOUTUBE VIDEO: [VIDEO: https://www.youtube.com/watch?v=gAtwRmTbrOY]Japan, land of the rising sun.Home to over 120 mio. people, and

Not only is this site gorgeous, historical, a great taste of traditional Japan, but it's completely free.The shrine was founded in 711 but relocated in 816 at t