If you have not read it already, make sure to check out part one of the trip, where we visited Hiroshima and Miyajima!

In the second half of our 2019 Rugby World Cup trip, we headed to Kyushu where we visited Kumamoto, Oita and Fukuoka. We covered a lot of places so let’s get started.

If you are all about taking those scenic shots of Japan, then the Suizenji Garden (水前寺成趣園)in Kumamoto is for you. Built over a period of 80 years from 1632, it was originally a temple that was later transformed into a garden by Hosokawa Tadatoshi, a famous feudal lord. Wanting to enjoy his tea, he transformed the site into his tea retreat. It’s said that he chose this site as the natural spring pond which is a plentiful source of clean water —perfect for preparing tea. 🍵 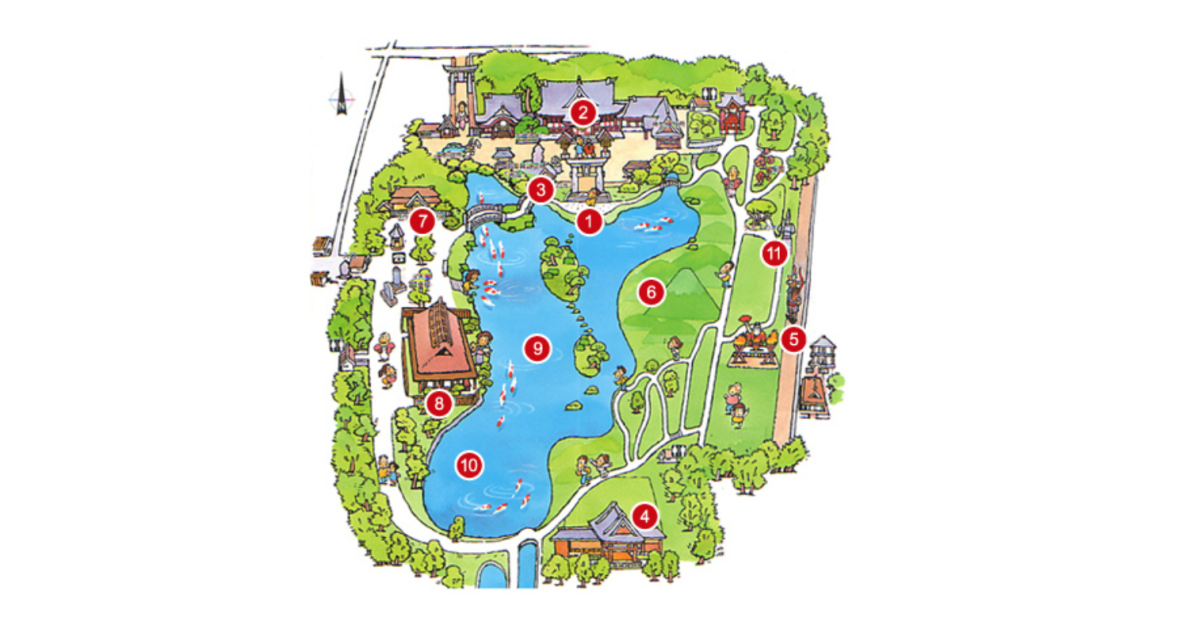 Map of the Suizenji garden

As you can see from the map above, the garden surrounds the central spring-fed pond. As you walk through the garden, you’ll notice the towering cone shaped hill representing Mount Fuji. 🗻It’s also said that the layout of the garden represents the 53 stations of the Tokaido highway from Tokyo to Kyoto.

Today, Suizenji garden is the perfect backdrop for wedding photos, tea ceremonies as well as performances. Popular with people of all ages, the garden is also the perfect place to take a break from city life, take in the beautiful scenery, paint, or simply just relax.

During the month of February, you can enter into the Suizenji Garden for free by wearing a kimono! 👘If strolling through the park wearing a kimono tickles your fancy,, there are many rental kimono shops on the streets leading to the main entrance such as Wa Collection. You’ll also find a number of tasty Japanese sweets and souvenirs—perfect for warming up in the winter months, or cooling down in the summer. Get dolled up and head to the Suizenji Garden for a picturesque photo op. 📸

Note: It takes around 30-40 minutes to complete the loop around Suizenji garden so make sure you give yourself enough time to enjoy this beautiful zen-like scenery.

One of the striking features as you walk up to the entrance steps, are the two larger than life deity statues that guard the temple.

The Kihara Fudoson temple is most famous for its annual grand fire festival held every year on February 28th. And we were very lucky to have visited the temple on this day.

This is the day when many worshippers gather to witness the ceremony whereby practitioners walk over the ofuda (wooden plaques that are blessed to protect people’s homes which at the start of the new year, are returned back to the temple) and set on fire. 🔥😮Temple practitioners then gradually build up a roaring flame from the branches of fir-trees before casting the ofuda to the fire and slowly walking over them in bare feet. 👣The ceremony takes place over the course of a few hours with other temple practitioners chanting and playing the taiko (Japanese drum).

There’s a saying in which once the practitioner has finished walking over the fire, if a worshipper does the same, it will bring a year of good health.

From Kumamoto, we then headed northeast to Oita Prefecture, where we visited Umi Jigoku ♨️in Beppu. Umi Jigoku literally means “sea hell” and is one of seven spectacular hot springs that you can check out. They are not for bathing but instead for viewing purposes only as the temperatures can reach as high as 98°C (208.4°F)! 😳The striking cobalt blue color comes from the high levels of iron sulfate in the water. Umi Jigoku is located in a garden surrounded by lush forest and cherry blossom trees where you can enjoy the scenery changes with each season.🌸🌿

After visiting Umi Jigoku, we enjoyed a lovely steamed dish meal of vegetables, seafood and chicken at the popular Jigoku Mushi Kobo Kannawa restaurant. Steam bellows from the kitchen as staff cook the food using the natural steam vents. A definite must try while in the area. If seafood isn’t your thing, a wide-range of menu options are available.

Sand Bath Experience, Only in Oita 🏖

After a long day of sightseeing, we got to experience what it was like to take a sand bath where we were buried with only our heads sticking out. It’s said that bathing in the sand brings a number of health benefits including improved blood circulation and clean skin. After just 5 minutes in the sand, you can feel my legs throb to your heartbeat. Combined the sound of the nearby waves gently lapping on the shore, it’s a truly relaxing experience.

We’ve actually written an article discussing three unique tattoo friendly onsens in Oita, including the sand bath experience so head here to read all about it. 👈🏻

We also had the chance to stop by none other than Oita Bank Dome stadium, where the Rugby World Cup will be held in October. 🙌🏻 The stadium was built in 2002 for the Japan x Korea World Cup and has the capacity to seat 40,000 spectators 😲! It also features the biggest retractable roof in Japan, allowing spectators to take in the blue sky on a sunny day.

When it’s not hosting sport events, the stadium is used for music concerts where some of the popular Japanese bands have played such as Exile and Mr. Children.

While there, we got special access to tour where the VIPs will be sitting. And we must say, what a view and those cozy seats. 👌🏼

Sugawara Michizane was a renowned poet, scholar and politician during the Heian Period. He quickly rose up the ranks to become an influential figure within the imperial court. However, with the rise of power, he clashed with the Fujiwara clan which ended in him tragically being exiled to Dazaifu—where he passed away in 903. Shortly after his passing, many natural disasters occurred and it’s said that it was caused by the angered spirit of Sugawara seeking revenge for his mistreatment.

Today, many students flock to this shrine to offer prayers for good grades and to pass exams. 🙏🏻Here at this shrine, you’ll be able to purchase omamori (good luck charms), with the most popular being education related charms that you’ll often see students hanging on their bags.

You’ll also notice a few cow statues on the complex. It’s said that if you rub the cow it can cleanse you of ill-health. If you are there, give it a rub and see if luck comes your way. 🍀

We were also lucky to catch the “Kyokusui-no-en” 曲水の宴 — taking place on the grounds of the shrine.

It’s a historical party game commonly played during the Kofun period, whereby participants (noble class members) would compose a poem beside the stream within a time limit dictated by the passage of a cup of sake flowing towards the participant. 🍶Regardless if you had finished composing the poem or not, you would drink the sake to either celebrate or be it a penalty for not finishing on time. It’s a cheeky game, kind of like beer pong. If you are able to catch this performance/game during February, it’s a definite must see as you will be mesmerized by the ornate and colorful costumes 🎎making you feel like you stepped back into time.

And whilst you are in Dazaifu, make sure to try their burgers. It’s not just any regular burger, instead of a burger patty, it’s with a juicy piece of karaage—Japanese style fried chicken. 🍗Yum!

On the last leg of our tour, we visited Miyajidake shrine 宮地嶽神社, home to three sacred objects that are literally larger than life! Also known as “Japan’s Big Three”, the first sacred object is the huge rope (shimenawa) talisman, that’s hard to miss.

For those wondering, this enormous rope is 2.5 meters in diameter, 13.5 meters in length and weighs a whopping 5 tons, the weight of a large bus! Every three years a new rope is replaced which takes a village as trucks and heavy equipment are brought in to transport and place it over the shrine. To see what this massive undertaking looks like, click here. 🚜

The second larger than life object is the taiko drum (called the O-daiko 大太鼓) with a diameter of 2.2 meters! Every year, on January 1st when it strikes midnight, the large drum is pounded which is said to echo far, far away.

The third larger than life object is dairin 大鈴 or large bell. This bell is 1.8 meters in diameter and weighs an astounding 450kg!

For those looking for an instagram worthy shot, this shrine has a perfect spot for that. Also known as the “the way of light”, it’s a straight path that overlooks the torii gate to the Miyajihama coast and beyond. Twice a year, the sun aligns with the straight path creating a path that’s illuminated, creating a scene as though it’s from a movie.

Sharing with you the must see spots and food to eat while visiting Hiroshima prefecture!

Higashi Hanazono is an area famous for one thing. Rugby. Locals are excited about it being announced as one of the grounds for the 2019 Rugby World Cup, and are

Originally created in memory of the late sculptor Fumio Asakura, Fukunyan will welcome Oita's Rugby World Cup visitors. Made by graduate students from Tokyo's University of the Arts, the 10-metre wooden sculpture will be sure to catch everyone's attention!

Dormy Inn Kumamoto is centrally located in Kumamoto, in front of the Kumamoto Bus Terminal and 1.6 km from the JR Kumamoto Station. It offers sauna facilities,

Get your fill of culture at Oita City's Art Plaza, which showcases the works of Oita's own internationally renowned architect and 2019 Pritzker Prize winner; Arata Isozaki. Opened in 1966 as Oita's Prefectural Library, this building became a gallery for the works of Isozaki in 1966. Some of Isosaki's most notable works include the designs of Spain's Domus: La Casa del Hombre, Ibaraki's Art Tower Mito and The Museum of Contemporary Art in Los Angeles, California.