Oita, located on the Eastern coast of Kyushu Island, with its thousands of onsens collectively spurting the most geothermally heated water in Japan, is truly the nation’s hot spring capital and a must-visit for those in search of volcanically-heated healing.

Oita is a steamy cornucopia of all-things-onsen. Beppu City and Yufuin Town in particular, with their arrays of nutrient-rich waters, offer bathers far more than just a bath. A myriad of healing remedies can be found as enthusiasts are steamed bare, covered in mud or sand, or, as vanilla as it sounds, just sat, as nature’s therapeutic baths work their magic. Designated a “Place of Scenic Beauty” the eight hot spring “Hells” of Beppu, however, are just for looking at.

Check out our selection of some popular, and less well-known sights in Oita where you can take some great photos! 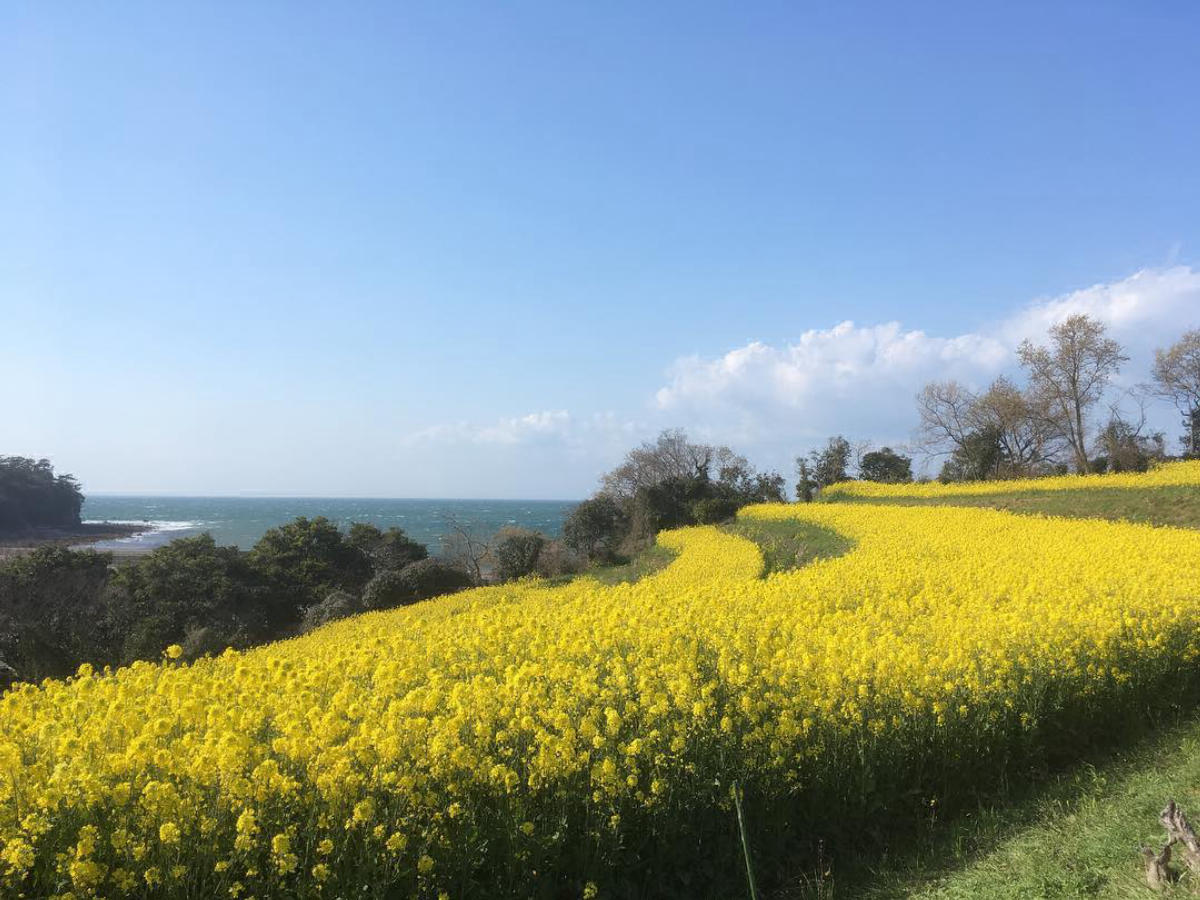 If you ever decide to head out to Oita during the spring or in the summer, then a must see spot we fell in love with was the Flower Fields of Nagasakibana, located at Mime district in Bungotakada city.

Just a 55 minute drive from Oita airport, each spring (from mid March to the beginning of April), the Nagasakibana flower fields are covered with over 22 million, yes MILLION canola flowers (referred to as nanohana in Japanese) that bloom, creating a sea of yellow. 😍With the Kunisaki peninsula as your backdrop, this sight makes it a truly picturesque place to capture some great shots of Oita. 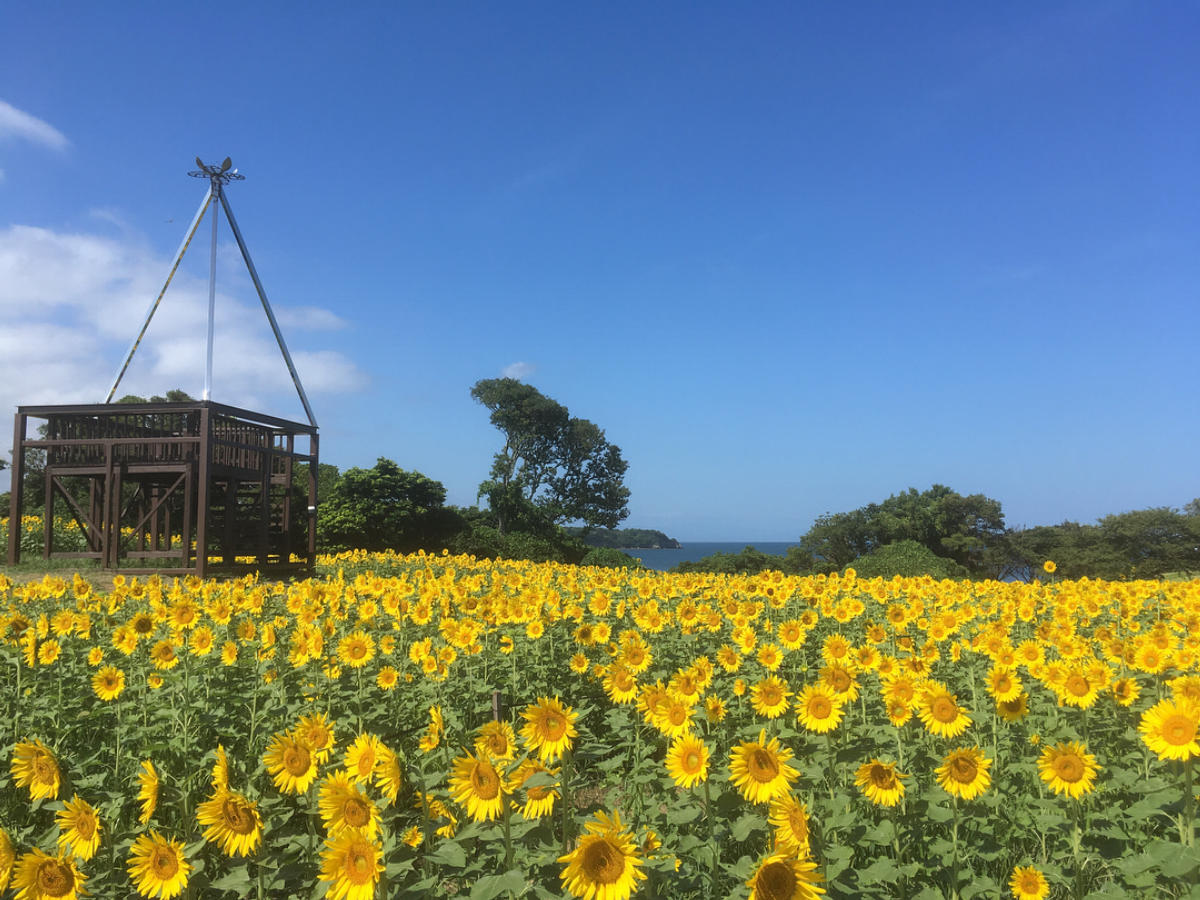 During the summer months from August to September, you’ll be able to catch over 1.4 million sunflowers dancing in the sea breeze. 🌻🌻🌻

Not only is it a destination spot to check out, it’s also a resort campground where you can not only relax in one of their cottages or European-made camping trailers (which btw, have a great view of the ocean blue peninsula), you’ll also be able to enjoy many types of activities such as standing up paddle (SUP) boarding, beach yoga, fishing and more. For more details, check the links below. 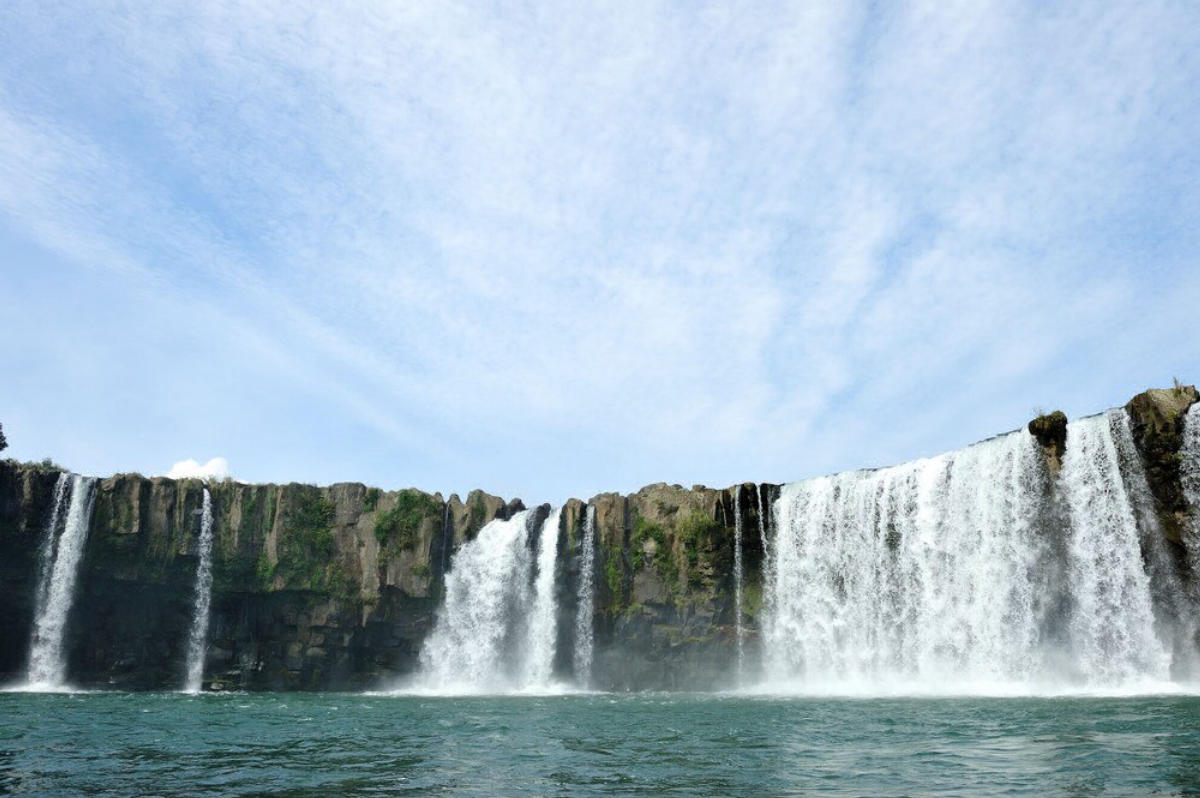 Just an hour away by car from Oita city, Harajiri Waterfall is known as Asia’s Niagara Falls. It’s said that this waterfall was formed over 90,000 years ago from the eruption of Mount Aso 🌋. With a width of 120 meters and 20 meters high, you’ll be able to take in the 360 degree view by walking around the falls on the suspension bridge. If you want to get up close to the waterfall, there’s a staircase that leads you very close. 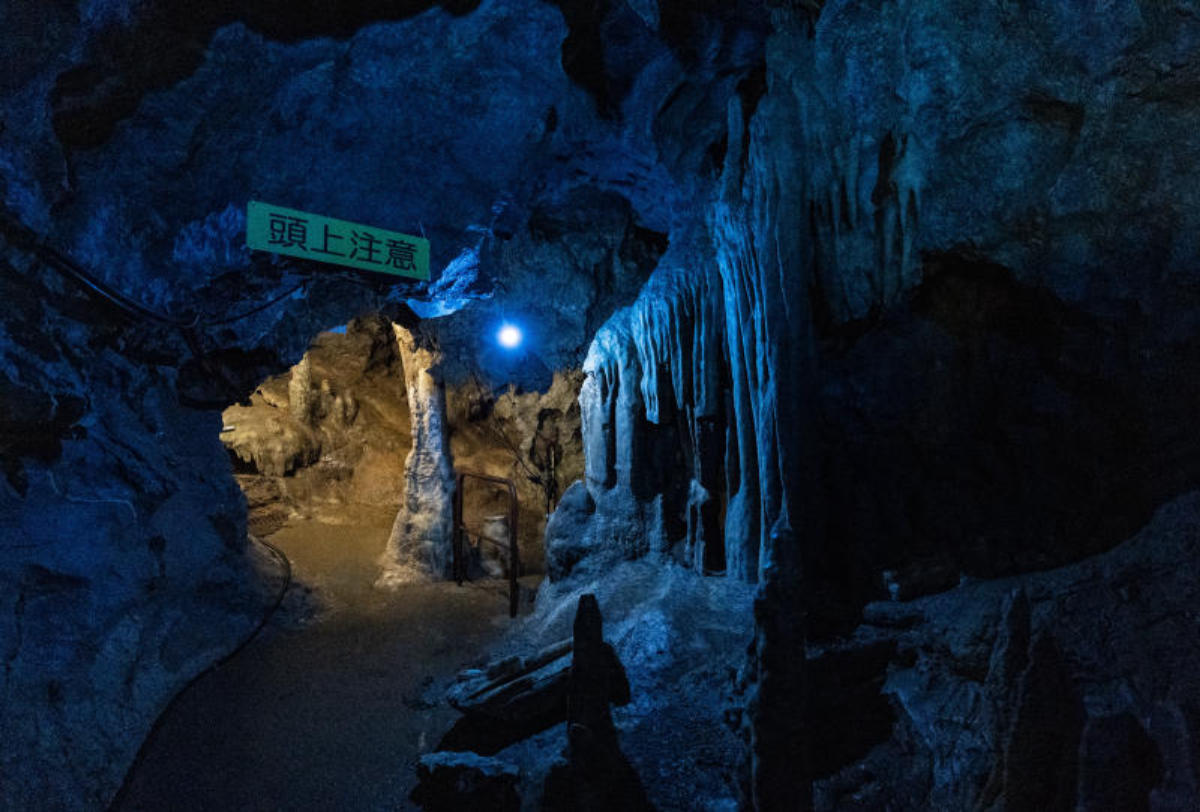 Just a 30 minute drive from Harajiri Waterfall, head to Inazumi Underwater Cave where you’ll be able to explore the largest underwater cave in Japan. It’s said that this underwater cave was formed almost 300 million years ago, this underwater cave contains dead pools where you can not only scuba dive but trek through the cave lit up in blue, green and red, giving it a sci-fi feeling. Interesting fact: The temperature inside the cave is 16 degrees year round, making it the perfect ideal temperature to go exploring all year round.

The Momoeda Tunnel via train 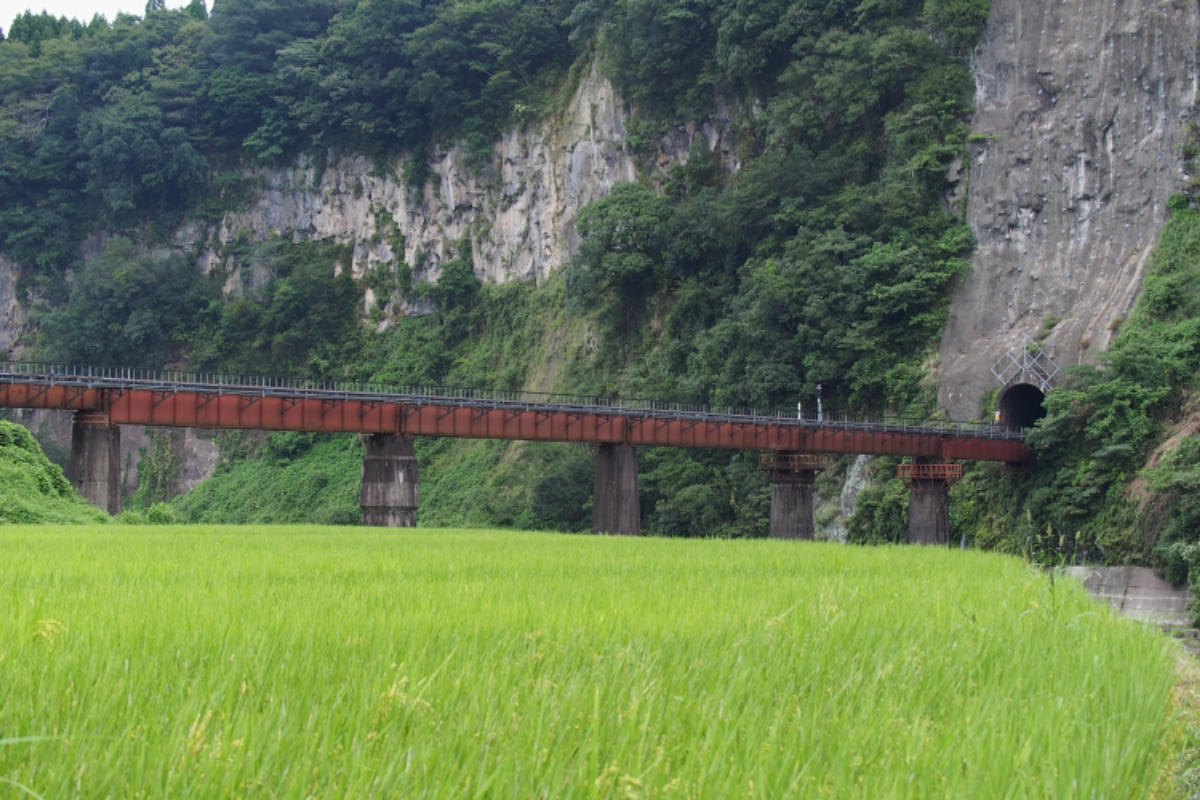 Located between Miemachi Station and Bungo-Kiyokawa Station is an old iron bridge leading towards an ominous tunnel. If you happen to be there at the right time or are willing to wait, at the most, 30 minutes, you will witness a red train cross the bridge and disappear into the tunnel.

Feel like a kid again as this surprisingly entertaining and fascinating event occurs as if it were pulled straight out of a fairytale.

We suggest standing in the green fields in order to take in the beautiful colors of the grass and red train as it contrasts the dull, old tracks that were built all the way back in the 11th year of the Taisho period. Our final stop to complete our perfect Oita Instagram feed is at Futago-ji temple in the northern peninsula. Before the Edo period there were 185 temples that are all now unified by the Futago-ji temple.

Pass by the Nio Guardians at the entrance and follow the mossy stairs up to the main buildings. Feel free to look up as the sun cast spots of light through the thick forest of trees, creating a tranquil scene. 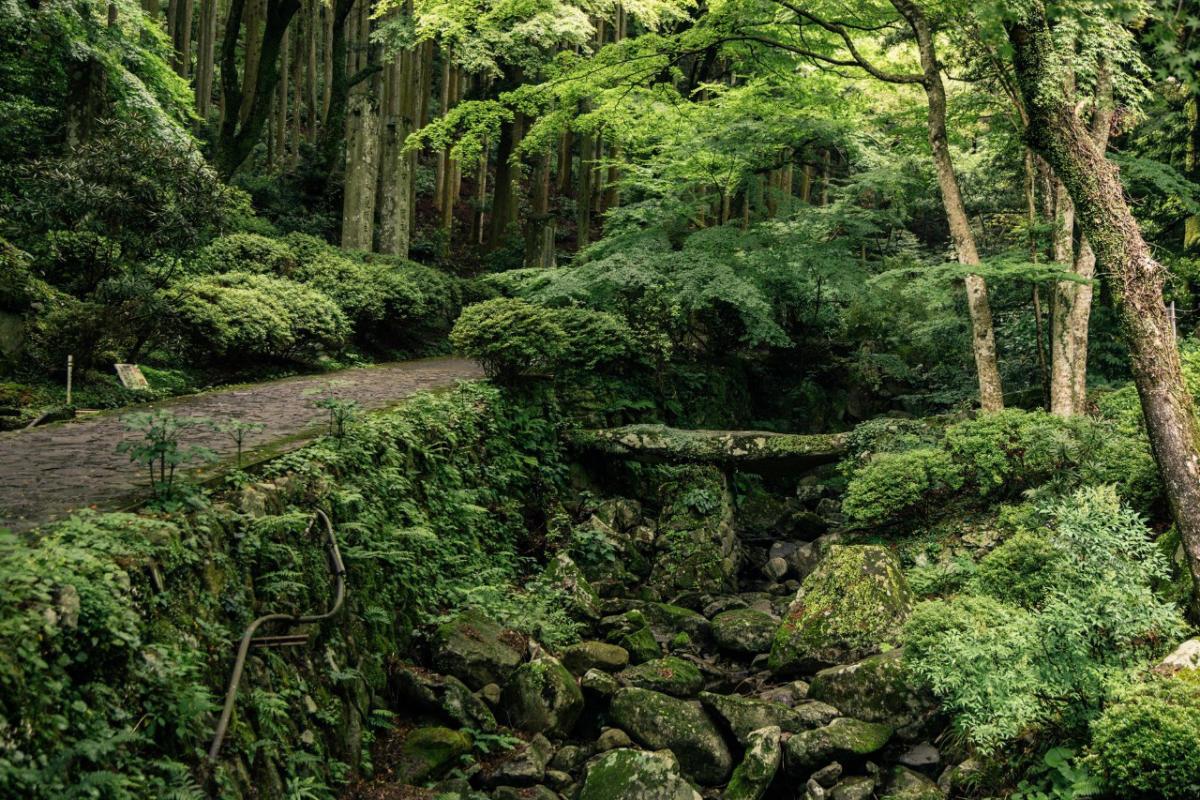 The 10-minute uphill climb is worth it since at the top you’ll be able to enter many temples like the Gomado Hall which houses Fudomyoo and the Okunoin Hall which displays the thousand-armed Kannon Bodhisattva.

Strike your best Princess Momonoke pose as you go off the beaten path and discover the rich history and beauty of this forest temple.

Sharing with you our top three unique tattoo friendly onsens in the onsen capital of Oita, Beppu city! ♨️

UNWIND AT THESE TOP ONSENS IN OITA ♨️

Known for its onsens and seafood, Oita has become a popular travel destination in Japan, especially for those wanting to take a break and relax. With the many different onsens you can stumble upon in Oita, we thought it might be easier to explain our favorites that we recently visited and tell you what makes them stand out from the rest.

Sharing with you part two of our Rugby World Cup series where we visited Kumamoto, Oita & Fukuoka. Giving you a breakdown of the sights and food to take in while there!

Making your own glass in Otaru, Hokkaido - our experience