Have you ever watched a Japanese comedy? They come in many forms such as skits, talk shows, and performance art. If you have seen any of these, you might have noticed how different it is compared to your home country. To really categorize their sense of humor, it is a combination of slapstick, witty gags, and subtle wordplay that is deeply ingrained into the Japanese culture. From the outsider’s perspective, it could be rather confusing, or seem over-exaggerated. However, the same could be said for foreign humor, which doesn’t translate well to the Japanese. In fact, there is a Japanese slang called an “American Joke” which means a joke that isn’t funny…🤨 The main types of Japanese comedy are rakugo, manzai, suberi, and kyogen.

Despite this brief description of Japanese comedy, seeing it live is not going to be an easy task, as most of the dialogue with probably be lost in translation. So with that being said, let’s move on to the venues where you can actually experience English speaking comedy in Japan!

Tokyo Comedy Store mainly features improvisation at several different venues every month. On the first and third Friday of every month, there is an opportunity to sign up for their open mic, so if you are adventurous and looking to make some laughs then just sign up for their email list! If you are just looking for some laughs then attend those nights at the live-house bar Gumuso in Asagaya. They have many events every month, so check out their website! This organization has been around since 1994 and is considered the leading comedic group for the international audience. In fact, there is even a documentary featuring TCS on the Documentary Channel in which the director, Brian C. Anderson talks about his experience doing comedy there. He made this film while being stationed in the US Air Force! 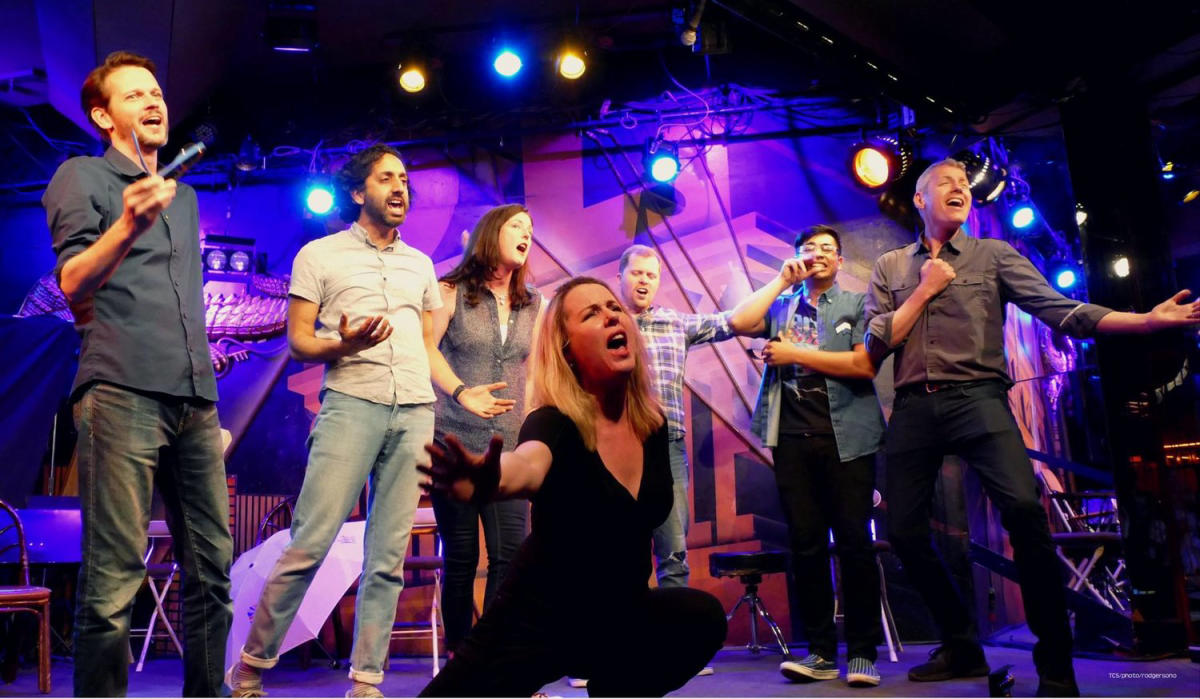 Standup Tokyo is just what the name suggests, lots and lots of stand-up! Every month, they host about 20 shows and you can choose to go to the nights where new comedians are trying out experimental material, or to the more experienced ones. Occasionally, comedians from oversees will be the headliners so keep a watchful eye out for those events. If you can speak or understand the native language, then they also have nights where the international locals perform entirely in Japanese! Are you up for the challenge? Check out there upcoming events here. (Good Heavens is the flagship comedy show that is located in Shimokitazawa on Wednesdays) 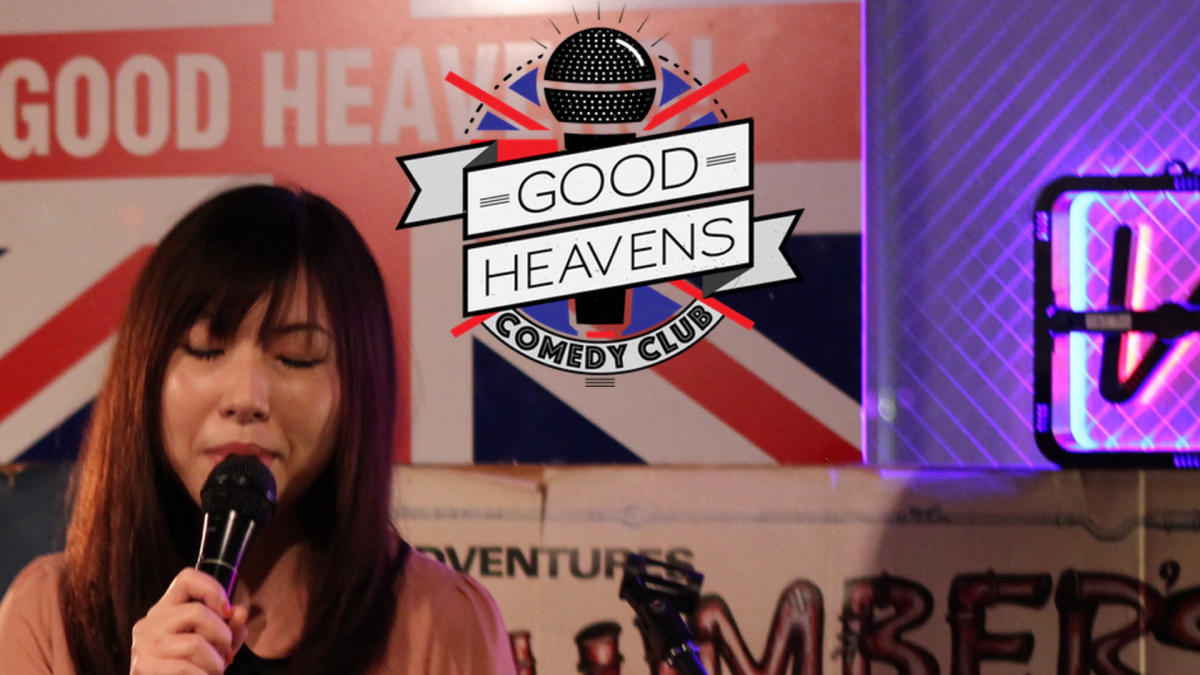 the pirates of tokyo bay

The Pirates of Tokyo Bay holds a show every month a pub in Ebisu called “What the Dickens”, which features games played in English as well as Japanese. They have private shows and public shows and ways to get involved within the community. If you have ever watched the show “Who’s Line is it?”, they do similar comedy to that. Here is a video of my absolute favorite scene. Visit their website to get tickets, and for some more information on what they do. 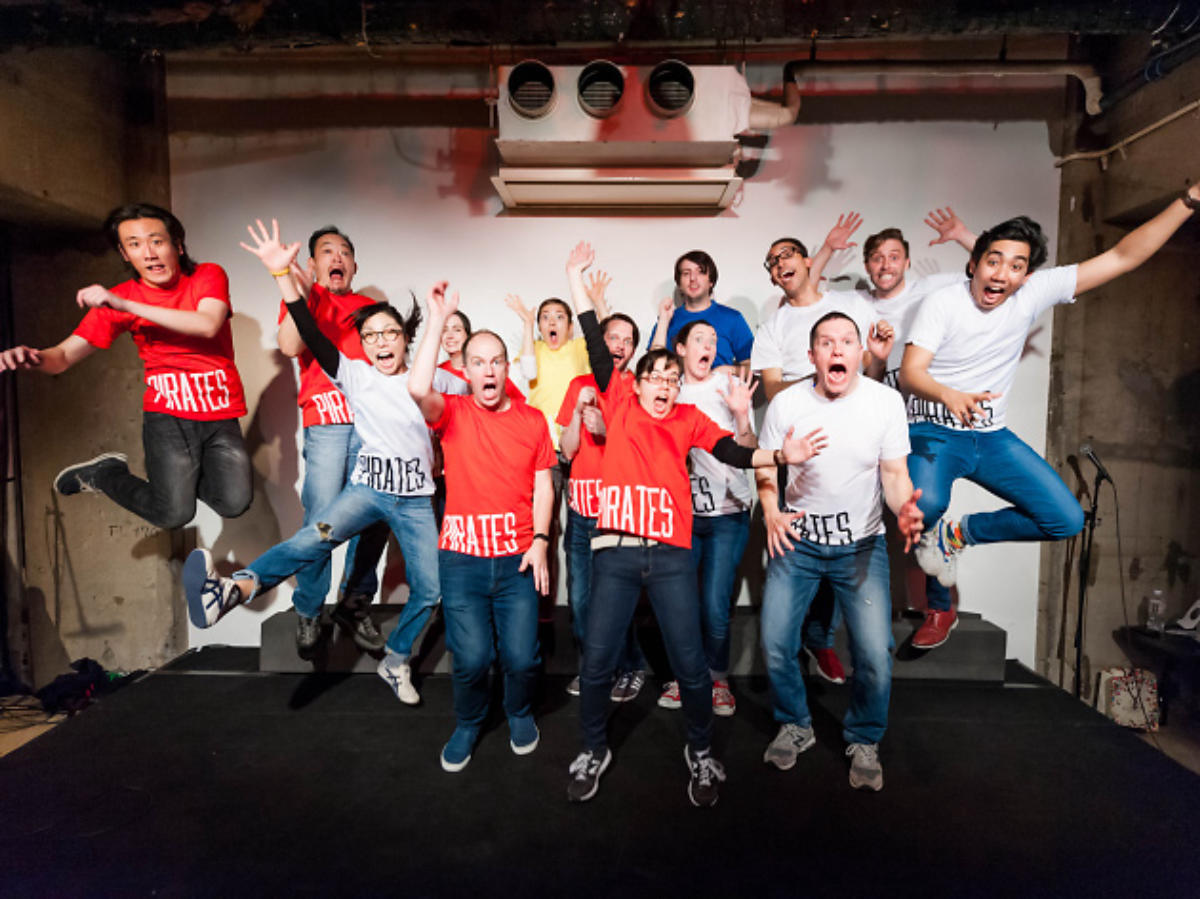 ROR Comedy is located in Osaka, which is considered to be the capital for Japanese comedians. They do standup completely in English every Friday and Saturday night. Check out their website for upcoming events. They have achieved a lot since their start in 2011, such as the TripAdvisor Certificate of Excellence multiple times, Kansai Scene's Reader's Choice Award, with their performers winning awards such as London's Comedy Cafe New Act Competition and the Seoul International Comedy Competition. 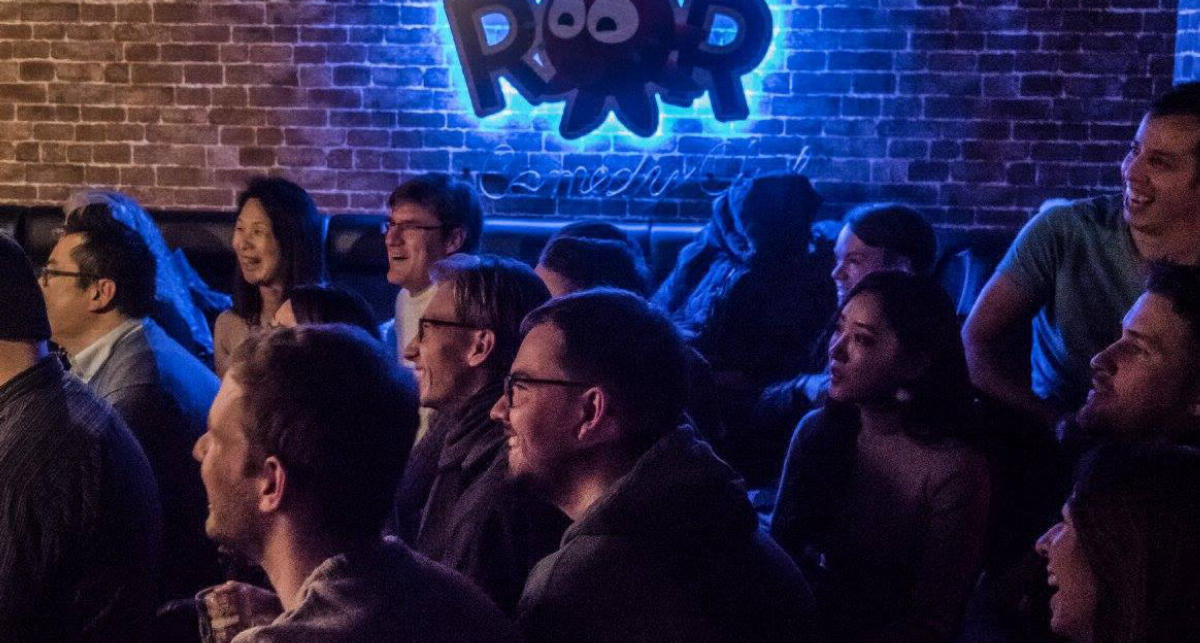 The pirates of dotonbori

The Pirates of Dotonbori are Osaka's #1 comedy group that features improvisation! If you find yourself free on the weekends, check out one of their shows and laugh it up with the locals. They have great reviews on Tripadvisor, and a facebook page where you can check out their upcoming events. 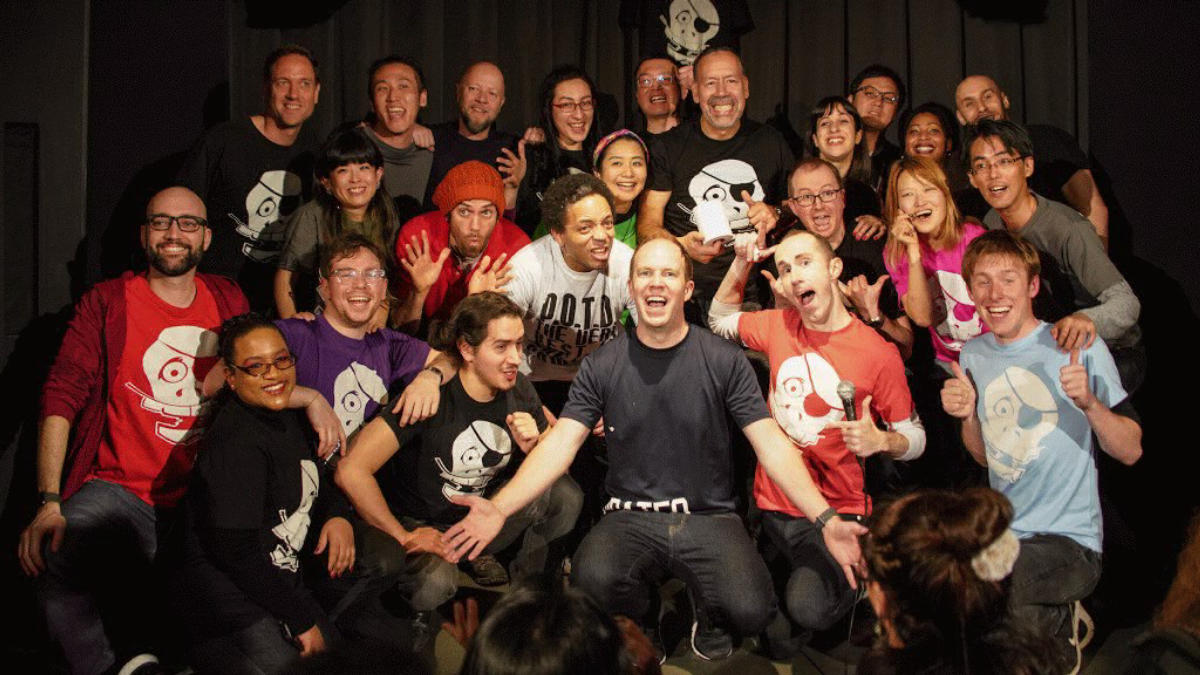 If you are looking for a laugh in Fukuoka, then Comedy Fukuoka has got you covered! They regularly host open mic nights in which anybody is encouraged to participate in for only 500 yen(~$5)! They also hold workshops for those that are interested in getting in the comedy biz, so check out their website for more details. 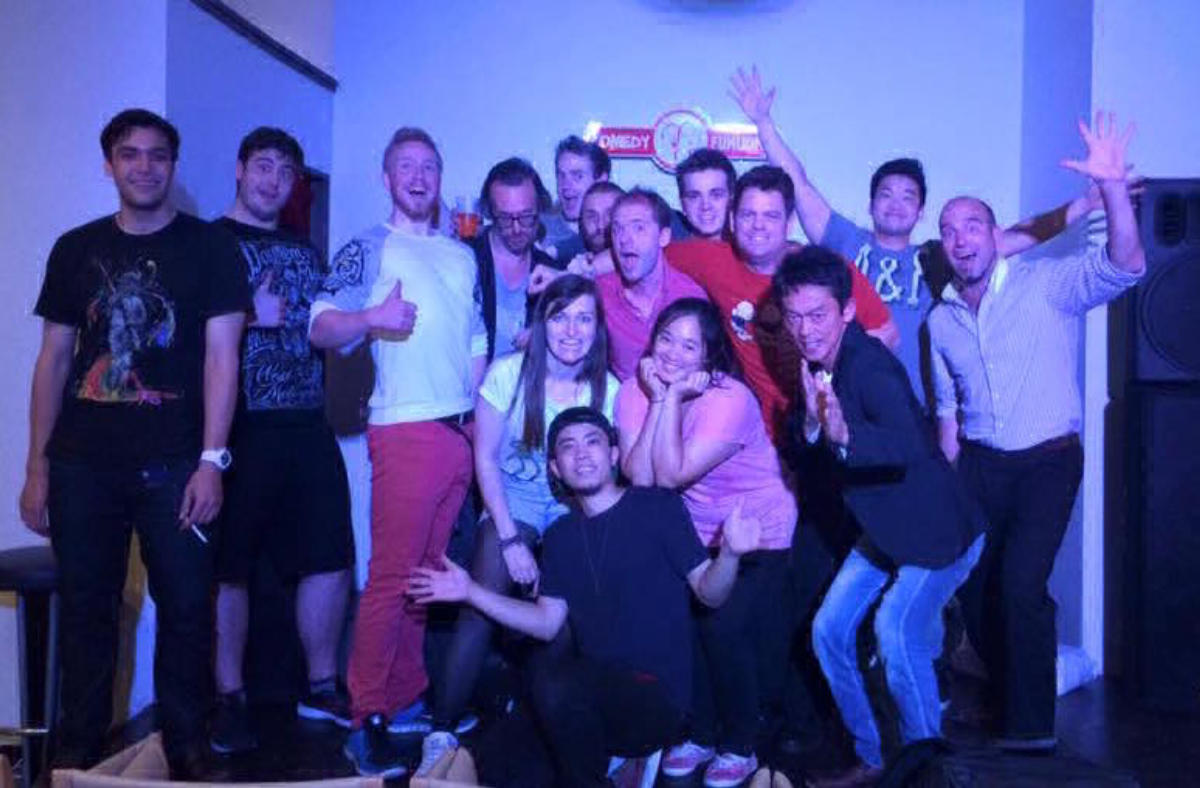 All of these clubs have different venues for their shows, some on a regular basis and others not, so the best thing to do would be to check out their websites for their upcoming events and information. However, here is a collection of some of the venues that do host scheduled shows on a regular basis.

In a previous article I talked about maid cafés, well host/hostess clubs are very similar. These clubs are geared more towards adults, serving a wide variety of

This venue in Ebisu, Tokyo, is a pub and bar that hosts live music and comedy nights, just 3 minutes walking from the station. The Pirates of Tokyo Bay is a comedy group that holds a show every month here, and it features games played in English as well as Japanese. If you have ever watched the show “Who’s Line is it?”, they do similar comedy to that.

Featuring free WiFi and air conditioning, Hayama Funny House is situated a 9-minute drive from JR Zushi Station. Yokosuka Base is 8 km away. The accommodation

Studio Gokko is the first studio in Japan that was created for the sole purpose of hosting improvisation workshops. Whether you are experienced, or just curious and want to learn more, their workshops will have something for all levels. Tokyo Comedy Store, one of the biggest comedy organizations in Japan hosts workshops every Monday and Thursday until Jan 2020. You can find more information about these events on their facebook page. (https://www.facebook.com/pg/tokyocomedystore/events/?ref=page_internal) Photos found on TCS Improvazilla

Why you should check out Shitacome- Japan's best Comedy Film festival!

Every year, for a week, downtown Tokyo tranforms to become a merrier place. This year marks the 10th edition of the Down Town Taito International Comedy Film fe

This is a bar that doubles as an event space for comedy shows and live performances. It has a unique space with an art gallery, amazing food and drink, and different events performing every week. Gamuso features all their future performances on their website, so be sure to check it out. TCS Improvazilla is a comedy group in Tokyo that has events at this venue frequently, so if you are interested in stand up and improv, then check out their facebook page for more details about their upcoming events. (https://www.facebook.com/pg/tokyocomedystore/events/?ref=page_internal) Photos found on Gamuso Website and Instagram