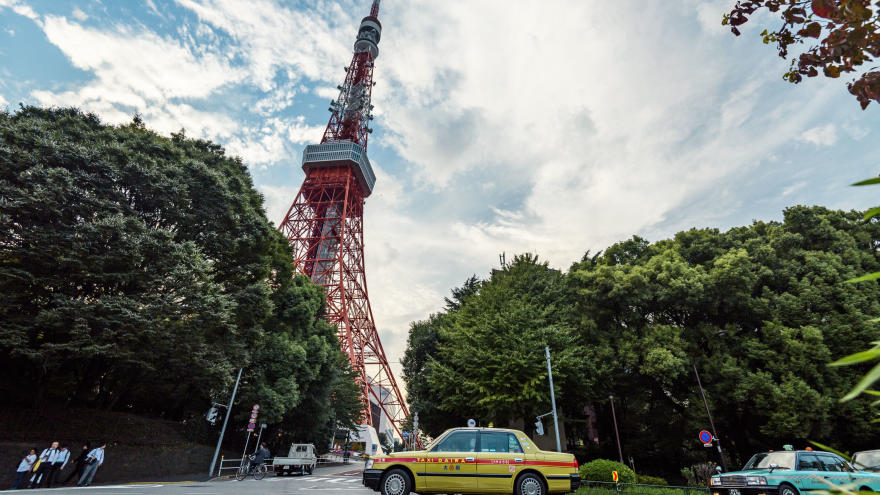 Located in central Tokyo, the 333m-high Tokyo Tower was built in 1958 and provides a great bird’s eye view of Tokyo, Mt Fuji, and its sky-soaring counterpart, the Tokyo Skytree, on a clear day. This was Japan’s tallest structure until the completion of the Tokyo Skytree in 2012. The main observatory, at 150m high, can be reached via elevator or, if you’re feeling brave, a 600-step stairway, both of which are ticketed.

The Tokyo Tower sometimes holds special events on Valentine’s Day or during Christmas season, when the tower exterior is illuminated, and the club on the observatory deck level holds various live music events every night with various themes.

The Tokyo Tower Aquarium exhibits 50,000 fish of 900 species according to their habitat.

Terrace Dining Tango is an Italian restaurant nearby Tokyo Tower.

This is a variant of beer garden specializing in the whisky drink "Highball". It is located just underneath the Tokyo Tower and runs from the end of April until

Tofuya-Ukai is a Japanese restautant that specialises in tofu.

01 Booster is a co-working and shared office space in Higashiazabu. (Drop-in ok)

Zabutton hostel offers accommodation in Tokyo. Guests can enjoy the on-site restaurant. Some rooms include a seating area for your convenience. Bathrooms are s

Situated a 4-minute walk away from Daimon Station, Shiba Park Hotel 151 offers free WiFi throughout all guestrooms and a private parking space on site. Shiba P

Mielparque Tokyo is a short 5-minute walk from both Shiba Koen and Daimon subway stations. It offers a restaurant, massage services and modern rooms with free w

View Hotel
Article by this is japan

Tower Power - getting to the top of Tokyo Tower on foot!

Tokyo Tower is definitely one of the iconic sights of the Tokyo skyline. It has been around since 1958, and whilst it's not as new or as tall as the other towe

Measuring 115 meters tall, this observatory tower offers a panoramic view of the Edogawa ward and the Tokyo skyline. The tower's design is reminiscent of the sh

Famous as a symbol of Kobe, the Kobe Port Tower is a 108 m-high landmark tower located in Meriken Park.

The Utsunomiya tower is a radio tower in Utsunomiya that is 89 meters high, with a lookout at the 30 meter point that looks over the city and has a clear view o

Fukuoka Tower is a 234-meter tall tower with a 360-degree view of the city of Fukuoka and the ocean.