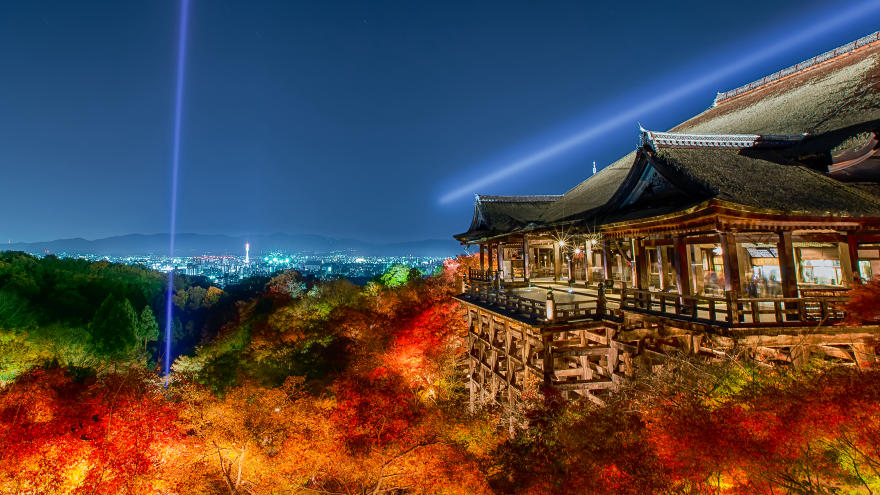 The Kiyomizu temple harks back 1,200 years since its foundation and gets its name, meaning “pure water temple”, from the pure waters of the waterfall. It is located on top of a peak on the Higashiyama mountain range and is famous for its wooden stage that seemingly protrudes into the air, 13m above the ground, that was used for noh performances to worship the gods.

The temple and its stage offer a spectacular view of sakura in spring and red maple leaves in autumn. However, after the spring of 2017, the main temple building and the stage will be closed for repair and unveiled again only in 2020, so do try to catch the last spring season before then.

After capturing your photo with the Kiyomizudera from the classic angle, framing the main temple and pagoda in the background, proceed along the one-way path that leads you down the mountain towards the Otawa Waterfall. Here, you will find three streams of water flowing out from three sources, and visitors can drink from them – each is supposed to represent longevity, academic success and a blessed love life respectively. Drinking from all three, however, is generally considered greedy and frowned upon.

The Kiyomizudera Temple was originally associated with the Hosso sect of Buddhism, but formed its own Kita Hossa sect in 1965. It was recognized as a UNESCO world heritage site in 1994. Visitors pay respect to Kannon, the Goddess of Mercy, here.

This museum houses exhibitions of traditional crafts such as metalwork objects, wood and ivory carvings.

Opened in 1970, this museum is dedicated to the history of the Meiji Restoration. It provides a comprehensive overview of the era, highlighting key figures and

Yasaka Pagoda is a five-storey tower located in Hokan-ji Temple.

Located close to the well-known Kiyomizu Temple, this temple was founded by the Buddhist Jodo Shinshu sect and features a graveyard of more than 15,000 tombston

Kiyomizu Sannenzaka - Guest House in Kyoto is conveniently located just a 5-minute walk away from the world heritage site, Kiyomizu-dera Temple. Free Wi-Fi is a

Built in the Sukiya-style of around 1900, Yadoya Manjiro features Japanese-style rooms with relaxing garden views. The inn is a 5-minute walk from Kiyomizu-dera

Kiyomizu Sannenzaka - Guest House in Kyoto is conveniently located just a 5-minute walk away from the world heritage site, Kiyomizu-dera Temple. Free Wi-Fi is a

Located within a 10-minute walk from popular sightseeing spots like Kiyomizu-dera Temple and Yasaka Shrine, Machiya Kiyomizu Shichifuku is a traditional 2-store

Kiyomizu Villa is a renovated traditional townhouse located 1.2 km from Kiyomizu-dera Temple. Guests will have the entire townhouse to themselves during their s

Kiyomizu Riverside is a detached holiday home with a terrace, located in Kyoto. The air-conditioned unit is 1.6 km from Kiyomizu-dera Temple. Free WiFi is featu

Despite the crowds- Kiyomizu dera

Another one of Kyoto's UNESCO world heritage sites, Kiyomizu dera rose to world prominence when it became one of the 20 finalists for the new seven wonders of t

Kiyomizu-dera is a historic temple, established in 807.